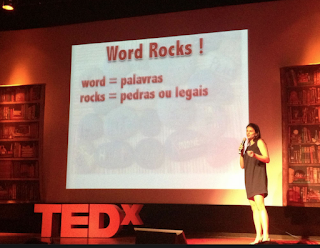 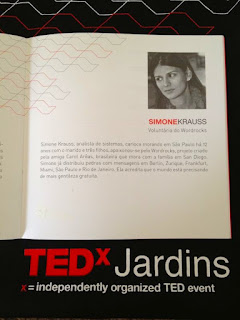 As we could not be there, my lovely friend Simone Krauss made ​​an exciting presentation to the audience of 150 people.

TED began in 1984 as an annual conference in California and has had among its speakers Bill Clinton, Paul Simon, Bill Gates, Bono, Al Gore, Michelle Obama and Philippe Starck. The organization intends to change its motto "ideas worth spreading" increasingly a reality. "We believe passionately in the power of ideas to change attitudes, lives and ultimately, the world," say the organizers of TED. We also. And you? 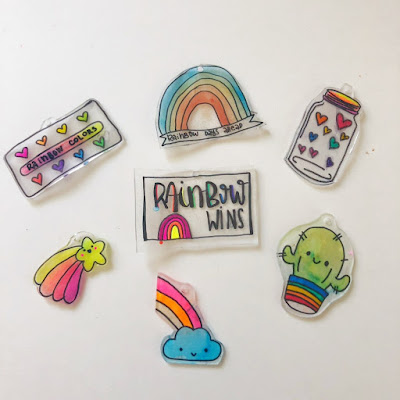 I found out about Shrinky Dink two weeks ago when browsing Pinterest and immediatialy thought that using it would be a perfect fit for Share a Rainbow Day ideas! I've never tried it before as I can't remember having it in my country, Brazil, when I was a kid. WOW! To watch that piece of shrink plastic into the oven getting smaller and harder and then becoming a 3D trinket to treasure forever it's soooooo fun! To celebrate Share a Rainbow Day, I created a kawaii inspired rainbow clip art to be downloaded for free! Supplies Needed (Affiliate links for your convenience): Shrink Dink sheets  Hole punch Scissor Black marker Neon Pencil set Moonlight Gelly Roll Click HERE to download the Shrinky Dink Template How to prepare:  Print out the template. After printing it, trace the outlines with a fine tip Sharpie. I filled in all of the details with different supplies (check out pictures). Each brand/type has different instructions about the best side to 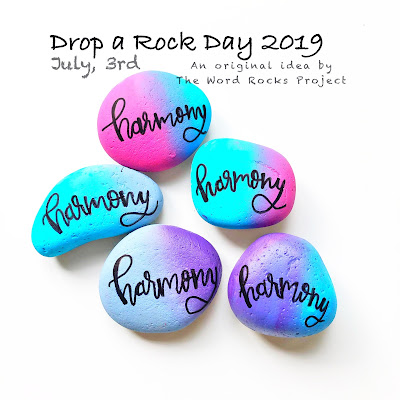 I'm super excited to start painting rocks to our  International Drop a Rock Day 2019, an original idea by Word Rocks Project ! As you may have noticed, the word for this year is HARMONY! To start celebrating the day, I'm sharing below a super easy tutorial to paint ombré rocks, one of my favorite styles (my art students love it too!). Supplies needed  (Affiliate Links for your convenience) Make up wedge sponges  Acrylic Paint  Rainbow Brushes Black Permanent Marker Step 1. Paint each half of the rock with a solid color.  I used the blue blush of the rainbow set. Step 2. On the flat side of the sponge (the same you use to make up) , put one of the colors on half of the sponge and the other color on the other half.  Step 3. Use a small brush (the yellow from the rainbow set ) to mix both colors together and then add it on the middle of the sponge .    Step 4.  Start tapping the sponge near the middle of the roc 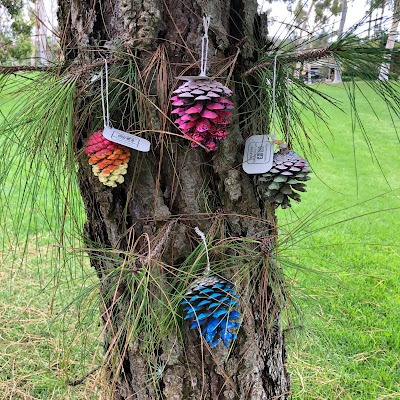 When you are creative, life flows through you . (I dont know the author to credit it) My Art Therapy coach course is bringing me so many insights about the benefits of art, specially to kids, whom i work with almost everyday. Art helps motor skill development,  self-expression and boosts to confidence and perseverance. Thats why i LOVE to bring ideas to tiny hands to craft with a purpose!! Enjoy the season to paint colorful pine cones and leave them hanging from trees to surprise people! Supplies needed (affiliate links for your convenience): Pine cones. I find them in the nature but you can buy some  here. Acrylic paint Adhesive spray (optional) Glitter (optional) Twine Hot glue gun Paint two layers of acrylic to make it look bold and bright.  I love ombré effect as you can see by the ones I painted! When completely dry, use the adhesive spray on them and immediately pour some glitter . Use the twine to give a tight knot around the stem and